Board Member on Various Boards 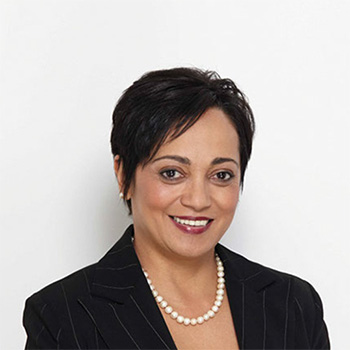 Board Member on Various Boards

Prior to this, she was the Group Executive HR at Nedbank. Before this, she was the General Manager for Human Resources at the South African Revenue Service (SARS). She also previously served as an Extraordinary Professor at the University of Pretoria’s Faculty of Economics and Management Sciences, and also served as former Adjunct Professor at the University of Cape Town. She is the Past President of the Institute for People Management South Africa and is registered as Master HR Professional with South Africa Board for People Practice.

She hails from the Cape Flats in Cape Town, and started her career as a secondary school teacher of English, then moved to the University of the Western Cape where she lectured in Teacher Education. After this, she served at Southern Life as Training Manager and then moved to the Department of Public Service and Administration’s: South African Management Development Institute, in Pretoria as Director. She held the position of Executive Employment Equity at Computer Configurations Holdings. Before her appointment at SARS, she filled the role of Regional Human Resources Director for Middle East and Africa for Reckitt Benckiser, a global FMCG company listed on the London Stock Exchange.

In addition, she serves as a Non-Executive Director on the Boards of the World Wildlife Fund (WWF) and is Chair of Remco; Board member at Tuesday Consulting, Empowerment Capital, Knowledge Resources, Business Engage (NPO), and is an Executive Director at the Boston Consulting Group SA.

She is the Chair of the Nedbank Eyethu Community Trust and serves as a Trustee of the Make a Difference (MAD) Foundation. She is a former President of the Harvard Alumni Association South Africa, and a current Fellow of the Institute of Directors SA.

She has presented at numerous national and international conferences as a keynote speaker.

In 2015, she published her autobiography entitled “Swimming Upstream” which focuses on her personal and professional journey. It has officially been announced as a best-seller. Since the launch of her book, she has done several “Swimming Upstream” talks nationally at corporates, schools, universities and charities, with the hope of motivating and inspiring especially disadvantaged youth and women.

She also completed her ninth Two Oceans Half Marathon in March 2018, and working on doing her tenth.